The beginning of the end

Reilles corp begins to press Alten in earnest, the battalions of the front line have begun to break and run!

To the west of La Haye Sainte Cuirassier from Kellermans corps have crested the ridge in front of Chasse’s division. The only option left to the Dutch militia in the face of this powerful enemy is to form square and prey their morale holds… once again with little hope and against the odds the Dutch fight off Kellerman’s cavalry repulsing them from the ridge with a close range volley.

Kellerman’s Cuirassier charge over the ridge straight at the Dutch Belgium militia!

While Kellerman’s Cuirassier where entertaining the troops on the ridge Reilles corps advances toward the British ridge from Hougomont pressuring the end of the ridge line, with the Dutch wavering along the ridgeline to the east the British need to hold off this new attack. Then all they need to do is work out how to stop The Guard Grenadier division which is continuing its advance toward the ridge west of La Haye Sainte. It’s not looking good for the Allies between Hougoumont and La Haye Sainte but they are clinging on! 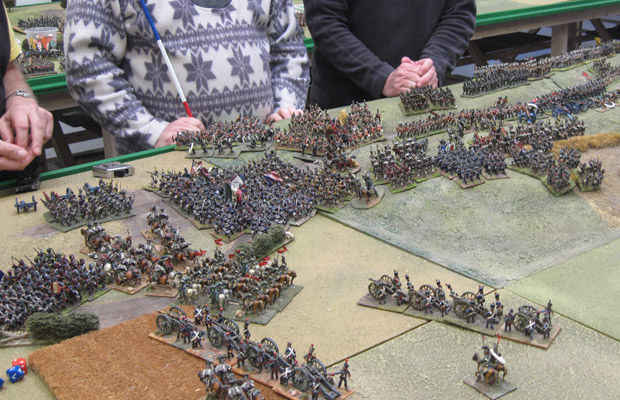 Reilles corp advancing on the British linies to the east of Hougoumont… the British must find some way of stopping this advance or the ridge will be lost!

Durutte’s division has won the fight for the sunken road to the west of La Haye Sainte but it wasn’t easy and they are having to regroup, not able to press the attack further at the moment.

The Dutch Belgium’s have finally been beaten away from La Haye Sainte, the French will not be stopped here now!

At the other end of the valley Bulow’s Prussians begin arriving at Smohain, ready to start their advance by way of Papelotte. 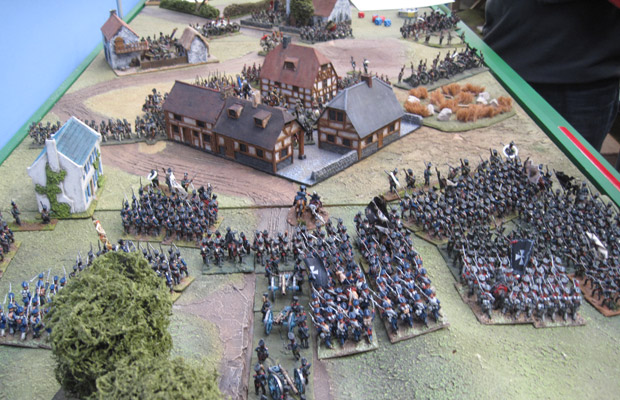 The large Prussian force lead by Purch gets in position to attack Plancenoit… can the Young Guard hold on in the face of so many allied troops??

Pirch is pushing on hard towards Plancenoit and the pressure begins to tell on the Young Guard holding it. The village is now the centre of the Prussian attack and the French are being forced back, giving ground in front of overwhelming numbers of Prussian infantry.